A CARDINAL POINT IS MISSING 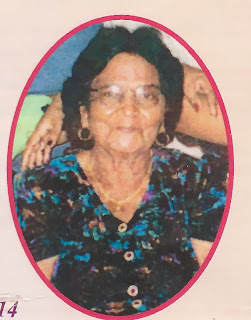 Hilda Ramkhelawan was 92 so this state of grief is not really acceptable. Hers was a long, full life and the end brought relief from incurable pain. We are told to be happy for her. The funeral was billed a Service of Thanksgiving in celebration of her life. I want to celebrate but I cannot. Not yet. Not today. My grandmother's death is the end for an extraordinary woman who was the glue that kept a dysfunctional family from shattering into tiny, unsustainable splinters. As her coffin disappeared beneath the shovelled earth my extended family were also quickly vanishing before my eyes. If this seems grandiose then you did not know the woman we called Ma.

So how did Ma keep us together? After all she was ordinary, educated only to primary school level. She fell in love with a married man and had two daughters and seven sons with him even though he never quite left his wife. When he died unexpectedly at the age of 50 she was plunged into caring for her kids – the youngest ones being four and three – completely on her own. I never heard her complain that life was hard and she never brought another suitor to her bed.

Instead Ma embraced life and swaddled her children, grandchildren and great-grandchildren in warmth and love. Growing up I did not realise we had little because her simple house was the embodiment of security and largesse. You could always find a bed for the night or an ear for your troubles. Couple this with a constant stream of the most delicious food and it was the prefect haven when life was overwhelming. Call in at breakfast time and you would be given hot Sada roti and pumpkin choka without reference to your affiliation with the household or state of hunger. Swing by to say hello anytime after noon and it might be curried channa and stewed chicken. No one could visit without having something to eat or at least a cold drink. And love was also personalised. Her son Denis believed in her fried chicken and always knew it would be left in a covered dish in the oven come Saturday afternoon not matter where he had spent the week. My childhood Sundays were marked by Ma’s return from the market with a little brown paper bag of warm rice cakes with my name on it. Steaming hot bowls of lentil soup would appear late morning and I cannot sample this soup anywhere in the world without silently comparing it (unfavourably) to her pot. Ma’s hand was sweet. Oh and I almost forgot to mention her sponge cake. For some reason she refused to make any other kind of cake and for some reason it remains my favourite.

While life took us in all directions there was something solid about the fact that Ma had been born at 70 Union Road, Marabella; had lived her whole life at 70 Union Road, Marabella and, after a brief hospital stay, was due to be taken back there on the day she took her last breath. Alexander Pope’s description of the happy man as someone “[C]ontent to breathe his native air, In his own ground” was Ma to the core of her being. Some of her sons have never left that home while others go back and forth with the vicissitudes of love and life. I never understood if she tied these adult men to the hem of her dress or if they stubbornly refused to quit the security she exuded. What I know is that even after not living in Trinidad for over thirty years it was her home, 70 Union Road, Marabella that was my True North.

There are a few things I should have learnt from Ma that I only appreciate now she is gone. I chose clothes without much thought and consider a lick of lipstick making an effort. Ma refused to be seen, even when bedridden, unless properly groomed. It was a matter of pride that the lustre of her hair was black without a hint grey. When asked about this feat she would cheekily reply,
“Dou-dou darling, you can’t see me hair is natural black?”
In her wardrobe were boxes of hair dye sent by a son in New York all labelled Natural Black. In the rush to attend her funeral I showed up with an inch of grey roots. Ma would never have allowed such slippage. It won’t happen again Ma – I promise. And of course it was her son Steve – the second to last of her babies – who faithfully did the root touch ups. I say of course because her sons were everything to her. They were her constant confidants, helpers and companions. Lovers and wives entered the lives of her sons fully conscious that they came second to Ma.

Ma’s bit of fun was the horses and like most small time gamblers she lost a little and won a little. Lady Luck once sent twenty five thousand dollars (then worth about $6000usd) her way with three winning horses in a major race. Being Ma she immediately shared her winnings among her children and a few lucky neighbours. The only point of having money, food or love was to pass it on to those without.

The deep well of her love meant that when her middle-aged son, the second-born, Hugh, died suddenly of a massive heart attack, she grieved so hard and for so long that her tear ducts were permanently damaged. Those were tough years for the family as no one could admit how depressed and withdrawn she had became. Our pillar of strength was cracking but yet again she somehow held herself and us together.

The memory of her I keep sacred is from the last time I saw her – laughing and smiling and repeating the same stories as if she had not just told them minutes before. She wanted me to know that life had been kind to her. When she needed help in the aftermath of my grandfather’s death a young neighbour filled in the forms and got her the meagre welfare she was entitled to. Ma also insisted that she was blessed because her children had been respectful, loving and devoted. And in case we had somehow forgotten she reminded us that her plot at the Marabella Cemetery had been bought over half a century earlier for the princely sum of $24.

Now that she is gone how will those who have held her at the centre of their world cope? These sons have lost their mother and best friend. Who will be the peacemaker when this brother say he don’t have nothing to say to that sister and was only talking to she for Ma sake? And will that other sister take any interest in her siblings now that Ma is gone? Will others who live far away come back to visit 70 Union Road? Will they be welcome? Ma, my generous, big-hearted grandmother, where is True North now that you are gone?

Identifying in your grief. Covering you in prayer. Proud of this textured, unique tribute you have paid to her.

Ma lives on embedded in your novel. From far away we send you a hug in your grief. Cynthia

Thank you Cynthia - I had her on my shoulder when I was writing the character Granny Gwen.

Fabulous tribute to your grandmother. I, too, can see Granny Gwen in what you wrote here. My grandmother who passed in mid-February was very much a cardinal presence in my life also. With my mother and both of my grandmothers gone, the mantle has passed from one generation to another. The mantle is heavy with responsibility and expectation, but also lightened by the confidence placed in me by these matriarchs. XO

Reading this in 2017, mere months after reconnecting with family. My aunt said, "Mammy was so' fraid that we would all fall out after she passed". And it happened. We used to be a family that limed together whole day. Rebuilding. Thank you for this.

Namaste Dear Visitor, we are web design and development team of Ganesh Himal Technology Web Designing Company in Nepal. we are base Location at khusibu, Kathmandu Nepal. Nepal Under Government License holder Web Development Company in Kathmandu. So we start our business since 2008 to till as regular service to Web Designing, Web Development, Domain Registration, Web hosting, Content Writing and SEO Services for Trekking Agency, Hotel, Main Power, Collage, Consultancy, NGO and INGO many others sector. We have a Professional Team of Web Designer and Developer over 12 Years of hard work with the latest technology to development. not only competition local The the market we have the best services worldwide. which is more popular and new technology. So Ganesh Himal Technology serviceWeb Designing in Nepal. and Web Development in Nepal. and also Content writing in Nepal. and Domain registration, Web Hosting in Nepal. Mobile App Development as Android and IOS. we are using to Getaway Payment system E-commerce Solution for Online Payment. So if anyone interest to Web Design in Nepal. Please, no need hesitate to talk and enquiry. this is our official Cell no:+977-9843467921 and Email: info@ganeshhimaltech.com and Website: www.ganeshhimaltech.com