IT AIN’T OVER TILL IT’S OVER

School sports day is something I avoided when it was mandatory and continue to avoid whenever possible. But The Husband agreed to go too so off we went to witness the sporting prowess of First and Second Born on land. Our stocky sailors with upper body strength did well in the discus and shot put. They excelled in hanging out, ignoring their parents and consuming the BBQ lunch. I can’t complain. Those mangoes didn’t fall far from the tree. We managed a discreet exit before moms and dads were obliged to make fun of themselves in the 100m sprint. But not everyone shares our dread. Many parents were dressed in House Colours and had come prepared with picnic spreads to rival Glyndebourne. Some had on running shoes and one person had running spikes. One mom however looked slightly glum so I inquired as to the source of misery.
‘We’re likely to be leaving the island soon,’ she said.
‘I’m sorry. We were just getting to know you guys,’ I replied.
‘But I’m not ready,’ she said biting her lip. ‘I’m not ready for my island adventure to be over.’

For her, living in Bim, with the added perks of an expat package, had been a delicious sampling of the other. While I don’t doubt that it was a wonderful interlude it was only ever that - a temporary state of affairs. Real life, which lay elsewhere, was simply being postponed. It was in that moment I realised I was home. When I moved here six years ago it was reluctantly - sacrificing what little passed for a career - for First and Second Born to have a proper childhood. But slowly and steadily I have fallen hopelessly in love with this small rock.

It is not that life on the rock is easy. Our utility bills are higher here than in London. Groceries are my single largest expense and it isn’t exactly overflowing with diverse entertainment. And speaking of entertainment – the TV died last week. From one episode of Criminal Minds to the next it ceased to produce a visible picture. All that was left were a few fuzzy lines. Rufus, the handy man, claimed his friend Horsey could fix it. Forgive my prejudice but a man named Horsey should not be trusted near electronics. What did he do to earn a nickname like Horsey? Does he look like a horse? Does he love horses more than ahem… people? The assumption always is that his birth certificate attests to something more prosaic like Fred or Barry. But this is Bimshire and anything goes. Someone is listed in the phone book simply as Happy (433-0201). It’s a mere trot from Happy to Horsey.

Having done my online research I galloped to Courts to buy a 40” TV listed for $1399 ($700usd). Like I said – I love living here – but they don’t make it easy. My inquiry was met with a steups.
‘I never see that TV here.’
‘But it’s on your website.’
I showed her my ipad.
‘Oh, that’s a TV uses to have,’ she said turning away.
‘So why is it on the website?’
‘We had it but we ain’t have no more,’ she said now walking off.
I trailed behind her.
‘Are you getting anymore?’ I asked.
‘No.’
‘Do you have something similar?’
‘It go cost you $1799.’
‘But I don’t want to spend $1799.’
‘Well you can’t get the TV then.’
She had reached a desk and sat down admiring her sparkling blue, acrylic talons.
‘Do you have anything else?’ I pleaded.
‘We have the new model to the one you was looking at.’
‘How much is that?’
‘$1499.’
‘Can I get that then?’
She sighed.
‘I go have to check the warehouse.’
She looked around the store. About five store assistants were gathered around a nearby desk talking.
‘Miss Browne, any of them new 40” in the warehouse?’
‘Call and see,’ yelled Miss Browne turning ever so slightly in our direction.
Our assistant steupsed again and reluctantly dialled a number.
‘Dwayne, it have any of them 40” TV that come in last week? A lady want one.’
She put the phone down and looked at me challengingly.
‘It have three in the warehouse.’
I smiled and asked to purchase one. You would think that the transaction would now be nearly over but we were only at the midway point. She handed me a slip of paper with a number scrawled on it and pointed in the direction of the only cashier working.
‘Pay over there,’ she commanded.
The queue was seven people long including a lady returning a toaster and a juicer. Twenty minutes later I had finally handed over the cash.

Now for some this typical retail experience drives them quickly back to The Great North or wherever they came from. For us long-term, Bim lovers it is just another encounter with a Barbados Business Prevention Officer. They are everywhere and easily identified. Restaurants, government offices, stores and gas stations – no place is safe from the reach of a BPO.

It’s part of the price we pay for living in paradise. I drove my kids to school on roads dissecting cane fields and sit at a desk looking out at the sea touching the sky. I will eat my lunch outside wearing the flip-flops I live in year round surrounded by purple Petrea in full bloom. After school my kids will sail before doing homework and eating salad and vegetables we have grown in our garden. I’m not ready for this adventure to be over. 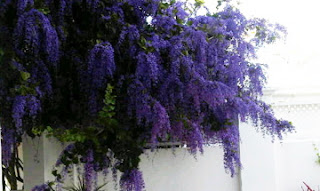 Can I join in the adventure??? But first....let me help out at courts with my customer service skills!! How to empty a shop ...of staff, quickly!!!!

When Courts start laying off staff you will hear the same staff say that they have been great employees. Courts service stinks. It stinks from the top down. I had a conversation with the manager regarding them jacking up prices the week before Christmas. I told her that I had been in their Northern Store a week earlier to check the price of an exercise bike. I went to purchase it a week later and the price was jacked up, in disgust I asked the manager why? He mumbled that is now the new price. I told him that I will not buy it on principle and walked out of the store. The island manager offered to sell me at the price I had seen earlier but I declined. I no longer had the urge to shop with them.