As we prepared for Easter by ensuring everyone had sufficient chocolate eggs, I casually mentioned to Diane, our helper, that we were thinking of spending Good Friday at the beach.
‘I can’t believe you want to go beach pon a Good Friday,’ she said amazed. ‘Is where you grow up?’
I explained that in Trinidad a public holiday was a reason to go to the beach. On Good Friday you might hang a bobolee (an effigy of Judas) which people took turns to beat with a stick. But once that was over it would be off to the beach.
‘Well you get lucky so far but that no reason to push your luck. People does say that if you go in the sea pon a Good Friday you go drown.’
She paused.
‘If you ain’t have no choice but to go in the water remember to never, ever turn your back to the sea. That is asking to get drown.’
With such strict instructions we dared not venture down to Pebbles Beach. Apparently Bajans are not alone in this fear of the sea on Good Friday. In Belize if you go for a sea bath on this particular day you will turn into a mermaid.

Before I could take time off for Easter I had a meeting at the Barbados Community College (BCC) and overheard that the Big Band class that was about to start had a guest teacher. From scattered bits I gathered this guest teacher had been in Barbados for the past six months exploring his links with the island having traced a cousin or two to our shores. Barbados was pivotal to the development of the sugar trade and exported both slave labour and planter expertise to the Americas. It is not surprising that a significant minority of our tourists journey here to explore possible bonds with this small rock.

This particular visitor, being a keen musician, had also found his way to the dilapidated building housing the music school and now regularly gave, for no fee, his time and expertise to the BCC students. Berkeley graduates teach at BCC so there is no shortage of excellence in the music department and I didn’t pay much attention to who this guest might be.

If I had not stuck around it would have been a horrible regret. The guest teacher turned out to be Marcus Belgrave. The Marcus Belgrave. Here was the legendary trumpeter and only surviving member of the Ray Charles band who started touring with them from the age of twenty-one. This is the man who at fifteen played with Dizzy Gillespie. Belgrave has performed with all the greats in jazz – Ella Fitzgerald, Lena Horne, Sammy Davis Jr. and Gene Krupa. He’s been given every award there is to give a jazz musician and here he was, settling down in our modest, open performance space to conduct a class.

We pulled a bench under a tree and sat outside the hall watching in as the master went to work. He is clearly a gifted teacher, gentling coaxing and constantly praising his band. Belgrave is not a well man. He is in his late seventies, tubes inserted in his nostrils and attached to a machine that trailed behind him. But the second the music began those tubes and machinery seemed to disappear. He makes no concession to his health and the master jammed with his trumpet for ninety minutes.

This unexpected, mid-week concert was a surreal experience. To be lucky enough to hear him play would normally involve a journey to the home of the Detroit Symphony Orchestra where he is Jazz Creative Director or the Lincoln Center where he is a member of their original Jazz Orchestra. Instead we enjoyed a free Marcus Belgrave performance while sitting under a Samaan tree with the sky a bright orange and red backdrop. It doesn’t get any better.

With Easter behind us, and no reports of Good Friday drownings, BCC invited school kids to a concert by the BCC band with Belgrave and his wife, the gifted vocalist, Joan Belgrave. I watched from the back and saw normally restless teenagers inhaling the music. When the concert officially ended no one moved. The jamming continued for another twenty minutes and when they finally called time Belgrave was immediately swamped by the next generation of musicians eager to talk to the master.

This small rock might only be 21 by 18 miles but it constantly surprises. After the concert I looked around there was the world famous composer, Howard Shore, quietly shaking Marcus Belgrave’s hand and reminding him that they had met thirty-five years earlier on the set of Saturday Night Live. This is one cool rock.


If you’re on island Marcus and Joan Belgrave are performing with the BBC band this Friday at the EBCCI. Book now because it’s going to be a sell out. 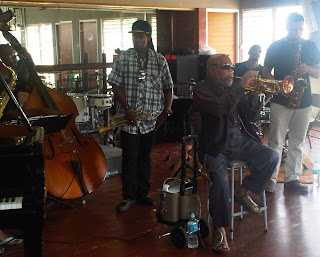 Best ringtone in 2018 here
Hi everybody!
Does your phone have new and attractive ring tones? Today I will share with you the best ringtone by 2018. Hot Ringtones. Ringtones are attractive. You can find and view instructions for setting up phone ringtones here: https://bestringtonesfree.net/news/

These are the five most downloaded ringtones in 2018


This is my home page if you want to reference and find other ringtones: https://bestringtonesfree.net/