When I first arrived in Bim I could be counted on to be at the opening of an envelope. As a cultural producer I made it my mission to be at every gallery opening, play and music festival. Six years later I have to be persuaded that it is worth the chaos that ensues when I am not present to supervise homework and have dinner with the family. And truthfully I am a little jaded by the repetition. With few exceptions the same events happen in the same way with the same personalities year in, year out. You could write the programme yourself as there are few incentives to do things differently or yes, dare I say, better.

So it was with middling expectations that I went along to the book launch of Andrea Stuart’s Sugar In The Blood last Monday while grandma did homework duty. Her parents are dear friends and I was keen to show our support. What I dreaded was the pomp that is a necessary part of West Indian events. Depending on the importance of the speaker you often have to endure long speeches from a succession of poorly briefed government officials, government agencies and any Big Up that is in attendance. This event had all the hallmarks of being one of those where you are asleep long before the main act.

But nuff respect to the Barbados Museum. Each speaker who preceded the author was relevant, spoke briefly and contributed to a deeper understanding of some aspect of the book. And miracle of miracles – the most time was saved for the actual author who we had all come to hear read and speak about her work.

Now when I say you have to read this book I mean turn off the TV, stop flicking through that gossip magazine, disconnect your Facebook and Twitter accounts and start reading. I honestly thought that being reasonably educated I knew about the history of the Caribbean and the role of sugar in shaping it. After all, I am descended from Indian indentured labourers lured across the globe all because of sweet, sweet sugar. But Andrea Stuart’s epic tale of her own family made me appreciate the nuances and ironies of this bittersweet commodity more profoundly. The daily school run on roads that straddle the ubiquitous sugarcane fields of St. George and St. John has taken on a new poignancy. I can’t look at the sugar cane harvesting now taking place without being summoned to the world Stuart re-imagines of her white, black and brown ancestors. Beautifully written, she sets her personal narrative against a backdrop of global influences and events all the while weaving a mesmerising tale.

As Stuart read from her work and answered questions from the small group of about seventy people present it is clear this bright, charming, intellectual powerhouse pulls no punches. She acknowledges her white forefathers pioneering spirit but never forgets the inhumanity of the slavery they practised. I wish more Bajans generally were at the launch and I wish more Bajans of a lighter hue had come to listen. Barbados remains a society that has yet to come to terms with its own history. Race is a factor in every walk of Bajan life but we never talk about it as if acknowledging the elephant in the room would make the problem worse than it is. The Yacht Club my boys sail at is predominantly white and only started admitting darker skins in living memory. Many of my friends still refuse to join because of that history. The marriage of a prominent white businessman to a dark skinned beauty still creates a stir wherever they go. Cattlewash on the ruggedly magnificent east coast is the preserve of white Bajans while Bathsheba a mile away allows for a mix of hues. You can tour a gracious plantation house but slave huts are unceremoniously torn down. And so it goes on with Barbados neatly sliced - the black, white and brown faces coexisting but separate.

Sugar In The Blood should be mandatory reading for all Bajans. Maybe they would realise they aren’t so separate and different after all. Claims of race are far more contested than we would like to admit. Stuart pleads for mutual understanding in the Epilogue reminding us that “we are all descendents of migrants – those resilient souls making the best of history’s terrible twists of fate or those brave opportunists taking a chance on the future and striking out to forge a life for themselves in the new world”. Get hold of Sugar In The Blood. Now. 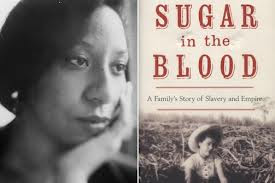 Barbados is complex, yet simple. But we have to look at the history of sugar not in Barbados, but in London.

Once upon a time sugar was likened to gold in London, a rare commodity. Londoners were obsessed with tea and since it tasted better with sugar, the evil began. Coffee then seemed more palatable and more evil was born.

Merchants saw that sugar could lead to unimaginable profits. But where on God’s green earth was the labor going to come from. In the end West Africa was raided, decimated, and plundered. All of this was done for what, for the sake of sugar in tea or coffee.

Now Barbados, bitter with sugar to taste, mixed like the option of tea or coffee, but we all know that simple sugar makes it sweet. And how correct is the title, Sugar in the Blood. I am afraid all Barbados have sugar running through every soul. Whether the souls be white, black or other, the complexity of who is on top or at the bottom, rules.

Surely Barbadians will agree all that need apply is to put some sugar in the tea to taste. If only race in Barbados was that simple, if only.