MY GOLD CUP RUNNETH OVER 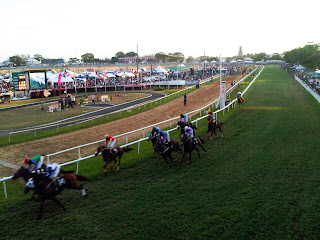 I cannot fathom how I have passed the half way mark of my natural life expectancy without buying a horse. By now I should at least own a piece of horse (rather than accidently eating it). I’m not greedy. One or two legs of a thoroughbred would be adequate. Clearly I made a wrong turn somewhere along the track of life. You see I was born with a dominant horse-racing gene inherited from my father’s lineage. For the first couple years of married life my parents lived in a tiny apartment below my grandmother’s house. Every day I would look out of my grandma’s upstairs kitchen window to see the back of the now defunct Union Park Turf Club in Marabella, south Trinidad.

My pram was pushed up and down that track and around those stables. As I got older my little cousins and I were allowed on race days to hang out around the periphery of Union Park. True we cared more about slurping Snow-Cones – shaved ice capped with red syrup and swirls of condensed milk - than if number ten came in first. But always horses, trainers, jockeys and bookies galloped in the background of our childhood. Two cousins are successful jockeys. One uncle works in a betting shop and my father probably sees more of his bookie than he does of his family. And growing up the year was demarked not by the rainy and dry seasons but by which of Trinidad’s three main race tracks – Port-of-Spain, Arima and Union Park - were hosting the races. It took serious old age and a broken leg to halt my grandma’s weekly Saturday outing to the races which she had been doing for perhaps sixty years.

All this is to say that after six years on this small rock I have finally made it to Ascot. No, not that Ascot – our Ascot - which we do with equal panache. Welcome to the world of the Barbados Gold Cup. Now in its thirty-second year, and in recent times sponsored by Sandy Lane Hotel, this prestigious race attracts horses from the USA, UK and elsewhere. The $107,000usd Purse cannot be classified as manure either. Plus the winner gets a genuine gold cup made specially and ceremoniously flown from the UK to Bim by BA.

But in spite of horses in my blood (long-lost family members greet each other with phrases like, Eh, long time no see man. You like eight in the 3 o’clock?)I didn’t go to bet. I was there for the lime. Between munching through the wonderful spread our hosts had laid on, I was busy checking which two-legs of Bajan society was there and who was wearing fancy hat and who seem to own most of the winning animals. For best themed Gold Cup head gear the prize undoubtedly goes to Mrs. Shelly Williams, business woman and the other half of millionaire Bizzy Williams, for her wide brimmed, gold creation.

Best-dressed male has to go to my date. I’m not biased. The Husband had on a crisp, white, linen suit, a green and purple stripped shirt with contrast collar and cuffs, all skilfully brought together by an acid green hanky artfully flopping out of his top pocket. The man was hot to trot.

With half hour to go before the Gold Cup race, the atmosphere was tense with excitement. The track was temporarily given over to cheer leaders, dancers, stilt walkers and the Barbados Police Band. 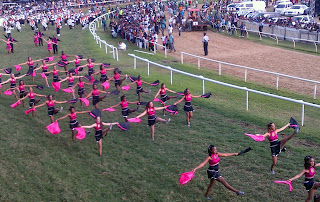 (The Parade at the Gold Cup)


By now I was hopping from box to box poking around to pick up tips and hear what bets were being placed. There was no choice. I would be betraying my father’s family if I didn’t have a flutter. But who to back? I checked out the names. There was no way my cash was going on a beast with a name like “Just Call Me Roger”. And “Show Me The Money” needs to show me the money first not vice-versa. “Kendal Moon” was too sugary for my taste and “Meteorite” seemed destined to self-destruct.

Continuing in this scientific vein I bet half my budget ($25usd) on number eight to win and place. The horse was called Daga which could easily be the title of a winning soca tune. It does not take a huge leap of the imagination to see Carnival crowds humming along to a refrain of,
Daga, Daga, Daga, Daga,
Oh, oh, oh,
Daga, Daga, Daga, Daga,
Eh, eh, eh

The other horse was a sympathy bet. Number eleven went by the unfortunate name of Aristodemus. Perhaps this was the moment for the name of a cowardly Spartan soldier to be rehabilitated. I put 25 bucks on him to win or place. Would you believe the horse come in first followed closely by none other than Daga himself? I pocketed a tidy profit of $42.50usd off the Barbados Turf Club and immediately earmarked these winnings for my “spa day fund”. But First and Second Born got whiff of the cash and declared that the only proper use would be four pizzas to be eaten while we watched the latest series of Top Gear. So much for that massage. 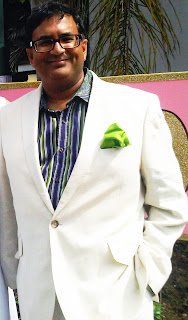 (The Husband at the Gold Cup)

Aristodemus is not named for Aristodemus of Sparta (who nevertheless redeemed himself at the Battale of Platea.)

Aristodemus name means "best of" (aristo) "the people" (demus) and his name was inspired by the desire to have a popular champion following the many popular champions from our stable.

Delighted to know you follow the blog and congratulations on your success with Aristodemus.

Your articles are very useful. This was a wonderful site and I really enjoy it the data you shared.