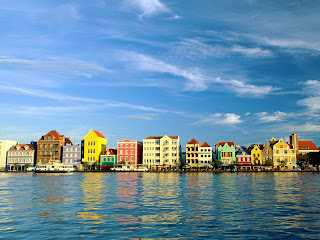 
The general election on Thursday saw the ruling Democratic Labour Party surprisingly returned to power by the slimmest of margins. It was a lacklustre campaign where voters had the choice of either a rather lame candidate or one who does not understand when to give up power. Big up my pal since university days, Mia Mottley, who retained her seat in style with a landslide victory. It would be Barbados’s loss if she were never given the opportunity of its highest political office.

But far more uplifting things have been consuming our household. We actually decamped for a week from this small rock to an even smaller pebble in the sea – Curacao. It was our first outing to one of the Dutch-speaking Caribbean islands prompted by First and Second Born’s constant nagging to participate in a sailing clinic followed by a regatta. Bim does not have a single qualified sailing coach so if the boys are to improve we must travel to places like St. Thomas, Martinique and Curacao where they can get training and test their skills in international races. Barbados had an Olympic competitor in the 2012 games but you wouldn’t know it. To get sail coaching he had adopted the Canadian flag.

My Trini senses find Curacao reassuringly familiar. To the west of the capital, Willemstad, is a huge oil refinery - a plateau of oil and gas storage tanks and tall chimneys flaring gas. You can smell and taste the pungent chemical soup. I could be driving through Pointe-a-Pierre refinery – just north of San Fernando where I grew up. And Caribbean people are at some fundamental level the same whether we speak Dutch, French or English. We visited during Carnival and the streets were jamming with music and revellers forgetting everyday cares for a few hours. It could have been Port-of-Spain.

What is unfamiliar is the beautiful Dutch architecture on the north side of the deepwater harbour that bisects Willemstad. Tall, slim, brightly coloured buildings line the waterfront. The beaches have nothing on Barbados’s white sands. And I will have to curb my tongue about Bimshire's poor service. If you think we have it bad here wait till you visit Curacao. Them have pretty, pretty hotels but forgot to train the bodies that work there.

Most of our time was spent sipping Coke at Pop’s Place in Caracasbaai as we watched the kids battle currents and winds of up to 28 knots. Pop’s Place (as basic as it sounds), at the water’s edge, served as eatery and HQ for the Curacao Youth Sailing Clinic and Regatta. Although they have only been going for a couple years it was well organised, friendly and the coaching was excellent – led by Nicolas from Ecuador and Zander and Anneke from the Netherlands – all highly respected internationally. The atmosphere was warm and the kids made friends with sailors from Aruba, St. Maarten, Bequia and Germany as well as the local mob.

But it seems we can’t even manage a quiet sailing outing. Does trouble sneak on board American Airlines and fly with us? Second Born came ashore on Day 2 of the regatta to be accosted by the loud, hyper-ambitious daddy of a competitor who claimed he saw (from Pop’s Place) Second Born hit his son’s boat during a race. The son never suggested anything like that to Second Born during or after the race and for his part Second Born denied any such offence. The good gentleman then proceeded to rant and rave up and down Pop’s Place asking for witnesses to this foul play. He found none but still spent the rest of the afternoon loudly proclaiming that he was going to make an official protest – which he is entitled to. The only problem was that Crazy Daddy was so busy telling everybody how them Bajan boys can't sail that he never actually got around to filing the protest within the allotted time.

To complicate matters, then all the races were over for that day, Second Born claimed he was fouled at the finishing mark by the same kid. We did not intervene. Second Born quietly filled in a protest form and gave it to the Race Committee. He got his witness and asked his brother and another sailor to go in with him as moral support. We continued drinking Coke through it all ready to support him whichever way it went. He won his protest and as a consequence the kid went from second place in that race to being disqualified. As the performance poet Paul Keens-Douglas would have said - who tell them do that.

Crazy Daddy was livid. Next thing I know he all up in my face telling me how I get he son disqualify and how my son don’t know how to sail and what how he son go beat my son etc etc. It was not pretty. Then apparently he threatened to withdraw that country’s team and to leave their national flag at half-mast to show everybody how they get thief. The next and final day of the races he spent the entire time telling the assembled gathering at Pop’s Place how them Bajan boys playing nasty on the sea and he have witnesses who going help him re-open the (final) decision made against his son the previous day.

First and Second Born were a little distressed by it all but we tried to suggest ways of coping. Crazy Daddy was only the first of many such gentlemen they will encounter in life on and off the sea. We had to catch our flight back and did not wait for the prize giving ceremony. That was a disguised blessing. Crazy might have burst a blood vessel when First Born got a podium place and his precious did not.