IT WAS THE BEST OF TIMES 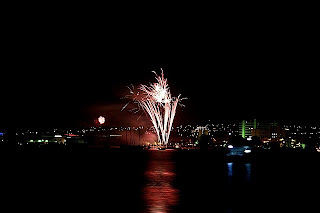 
January marks our third year in paradise and like many I am in stock taking mode. The past year was an eventful one and in the spirit of optimism that marks new beginnings this will be a “best of” 2009.

1. I sorted every last box in the garage and found a home for everything. Well, except the bunk beds and a single candlestick that has lost its best friend. But they are earmarked for a woman who wrote to The Nation’s Dear Christine column in need of basic furniture.

2. Hurdler Ryan Brathwaite brought home the first bit of gold ever for Barbados from the World Championships.

3. The One True Remote, which possesses the supernatural power to control all other remotes, arrived in the house via Amazon. Its abilities include turning chaos into order, bedlam into calm and clutter into simplicity. However, with power comes responsibility to control the vast stores of music, TV and DVDs. It puts The Keeper in a position of truly terrifying authority. Naturally, I appointed myself said keeper and have managed to keep possession lest the evil twins who roam our house find it and unleash its destructive power.

4. THREE new sushi places opened on this small rock. So bye, bye, macaroni pie. It continues to defeat me why a tropical island should adopt as one of its staple foods a dish of hot carbohydrate and melted fat designed to fuel Europeans through grim northern winters. In any case, the pie and I have now parted company without regret.

5. With the help of fellow sexpots Sonia and Helga, I set up the Hot Mamas Club with a mission to help each other sizzle. This culminated in me wearing a rather daring dress for our New Year’s Eve soiree – the kind sold on the basis that less is more. The Husband looked at me with a weird, disbelieving look and mumbled,
‘You look rather sexy.’
I was speechless.
The last time he said something similar was November 12 1999. And before you dismiss this faint praise be assured it is his reserved way of stating that you look hot enough to pork in all twenty-four positions illustrated in the Kama Sutra.

7. A wonderful weekly tea salon was institutionalized at Beacon House during 2009. Drop by any Sunday from 4pm onwards. A word of warning: if you say it, be prepared to defend it. After 7pm we do this neat trick where the Darjeeling turns into Merlot before your very eyes.

8. I continued to show my art in Barbados in spite of obvious public indifference to any work that is not a big, bright painting on canvas. If I find the courage to continue in 2010 that will be an even bigger personal achievement.

9. I found a new love. Golf. My friend Janine has begged me to stop before I go down the route of buying tartan clothing, making The Husband a golf widower or having numerous indiscreet affairs with identikit blonde party girls.

10. No one close to me died and as a bonus a couple gorgeous babies were born. Life goes on.

But how did the bike debacle work out? Did you ever end up rescuing them from customs?