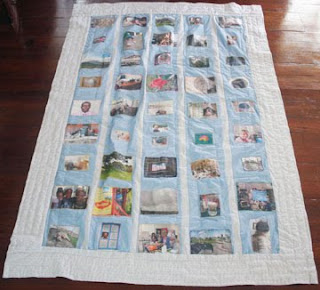 I am stitched up.

I have been stitching from early morning to late night in the studio, BBC radio 4 my only companion. Three weeks it’s been like this. Sequestered with jewel-coloured threads, acres of cotton material, and photos from fifty-eight people who responded to a call to collaborate. I have stitched so intently and fiercely that the metacarpals of the ring finger on my left hand look strangely deformed.
‘How you manage to mash up yuh ring finger?’ asked E. ‘People doh use dat finger sewing.’
‘Have you seen my demented sewing? I countered.
He shook his head.
‘Exactly.’

And there is no opportunity for him to now witness the crazed, compulsive needlework because it’s all over. C’est fini. It’s been a long haul. I have taken the offerings from my virtual community and transferred these digital images onto cotton – itself a tedious, involved process - then blanket-stitched these cloth photos to larger cotton squares. The large squares were then joined, bits and a border added for effect, and the whole sodding thing quilt-stitched to form what passes for a king-sized blanket. And it is a blanket for while it borrows elements from quilting it does not adhere to the rules of that craft.

The exhaustion from repetitive cutting and stitching is satisfying honest labour but at the same time I can’t wait to be rid of the blanket. The work is done and needs to find its own space. But stored somewhere in my hands is a lingering memory of hours and days and weeks of quiet meditation about the people who sent the photos, the images themselves and the shifting meanings of our individual and collective humanity in both real and cyber spaces. Benny has a thriving law practice in London. His picture was taken in the kitchen where once a week he helps cook and feed the homeless. Richard was boarding a BA flight. Indu in Trinidad watched over her sleeping baby boy. On Long Island George showed off his skill with a rip stick. Daniel is in Ghana. I have no idea when we’ll see each other again.

Square, by cotton square, the virtual offerings from places as far as Iceland, and as near as Bridgetown, became an object of physical comfort to a woman hunched over in her studio pulling needle and thread. And when the last stitch was stitched, and it was accepted that that was the last time my needle would push thread through three layers of cloth in an effort to bind them together, when I was completely sure, I did the only thing left to do. I striped off and wrapped the soft, warm fabric around my body.

After a few quiet moments of reflection it sunk in. I threw the freaking thing on the floor, checked on the internet that it was 11am somewhere in the world, and although most Bajans were having breakfast, I cracked open a celebratory bottle of the good plonk usually reserved for high days and holidays. Thank you London for being conveniently four hours ahead of this small rock. If you happen to be in Bim the real blanket is at the Morningside Gallery as part of a group show on collaboration that opens on 5 December. The virtual one is yours to keep. Or not.

I wanted to do a performance work by sleeping under the blanket in the gallery space for the opening. Second Born intervened.
‘You can’t sleep in the gallery, mama.’
‘I can if I think it will be a strong performance that will add another dimension to the blanket.’ I replied.
He looked at me intently with a pained expression.
‘That’s just weird.’ he whined. ‘People will think you’re a homeless person.’
‘No they won’t.’ I retorted.
‘Yes they will.’ he shot back.
‘Won’t.’
‘Will.’
‘Won’t.’
‘Will.’
‘Won’t.’
‘Will too.’
‘Well it’s my art and I can if I want to.’ I said and folded my arms to signal I was The Boss.
‘You can’t have any food at the opening then ‘cause you’ll be in bed and you said we can’t eat in bed.’
He had a point. While everyone was gaining a happier perspective on life with the aid of a little free rum and hot fish cakes I would be stuck under the blanket on a make shift bed trying desperately to have a nap. But that now had to be weighed against the perverse pleasure of knowing you are a proper embarrassment to your kids.
‘Well I guess people can imagine sleeping under the blanket.’ I conceded. ‘It’ll be on the floor anyway.’
Second Born’s little face exuded pure relief through every pore.
‘Yeah, mom. That’s so much better.’
He walked off satisfied at having saved his family from public humiliation. Wait till he finds out about my next work that requires tea and a naked woman by the sea. 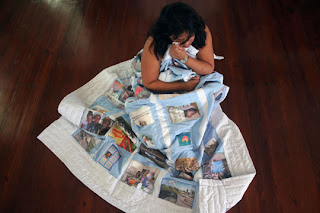 Let's 'free up'....I'll join you in the bed and drink and eat with you and we may allow the two young offspring to do same :)
How about it. I will come in jammies if you will...I MEAN this :)
Corrie

Love, love, love it!! I will be there with you in spirit.